168 were women, these 8 being the first. They flew unarmed, without radio, navigating by map-re 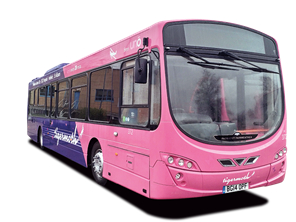 ading and always at the mercy of the weather. Until July 1941 women were only approved to fly trainers like the Tiger Moth or communications aircraft, but in 1943 11 women were cleared to fly 4-engined bombers.

The ‘ATA-girls’ were a very special sisterhood and we are proud to honour them on 8 of our buses. The buses run on our route 653 between St Albans, Hatfield and Welwyn Garden City. See if you can spot them all!

Born in 1906, Winifred Crossley had been a pre-war stunt pilot, and became the first ATA woman to fly a fighter plane in July 1941 at Hatfield. She served until November 1945.

Margaret Cunnison was born in 1914 and while with ATA only flew light types. She left ATA in March 1943.

Born in 1901, Margaret Fairweather joined ATA with over 1,000 flying hours behind her. She flew her first fighter at Hatfield in July 1941 and was the first ATA woman to fly a Spitfire. Margaret was killed in ATA service in August 1944.

Born in 1914, Mona Friedlander was a qualified flying instructor with a commercial pilot’s licence. She flew 32 different types of aircraft with ATA, including de Havilland Mosquitos and Wellington bombers. Mona left ATA in February 1943.

Born in 1918, Joan Hughes began flying at 15. She was youngest of the first eight and went on to become one of only 11 women to fly 4-engined bombers. She served with ATA until November 1945, and after the war worked as an instructor, flying replica vintage planes for the films like Those Magnificent Men in their Flying Machines and The Blue Max.

Born in 1905, Gabrielle Patterson was Britain’s first woman flying instructor. She flew 30 different types of aircraft with ATA, including de Havilland Mosquitos and Wellington bombers. She left ATA in March 1943.

Born in 1901, and once a ballet dancer, Rosemary Rees had over 600 flying hours when she joined ATA. She flew 91 different types, and was one of only 11 ATA women to fly 4-engined bombers. She became second-in-command of the all-women Ferry Pool at Hamble and served until November 1945. In 1946 Rosemary started her own air charter firm called Sky Taxi.

Born in 1902, Marion Wilberforce farmed in Essex in the 1930s and owned a de Havilland Hornet Moth, in whose cabin it’s said she transported chickens and calves! In ATA she flew 47 different aircraft types, including 4-engined bombers. She became Commanding Officer of the all-women Ferry Pool at Cosford and left ATA in August 1945, but continued to fly a Hornet Moth until she was 80.

Find out where out 653 route goes - click the button to see the route map and timetable.

The prices of all in 1 tickets in Milton Keynes will be changing on 12 February.

We're offering reduced-price travel between January and March, thanks to a government funded Help for Households initiative.

Uno Buses, which celebrates its 30th birthday this year, was crowned Top Independent Operator at the UK Bus Awards in London on Tuesday, jus…

Some of our buses run slightly differently in school or university holidays - click here for a list of the dates we run to for 2022-2023.

now on all Uno buses